The value of Pair Programming

Gary Filer made an interesting comment to me the other day; 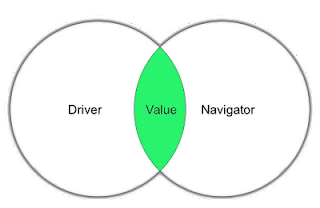 “But after seeing you pair for the last week, I realized that the shared part is actually the waste. The value is in the differences” 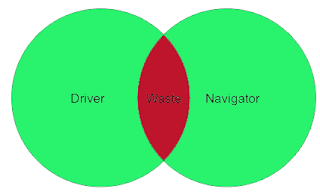 The Cost of Mistakes
In my talk ‘Introduction to Agile’ I assert that the core principle of agile development is accepting that we will make mistakes, and doing things to


core agile value:
Reduce the cost of mistakes
Being an introduction talk, I only talk about pair programming from a “Knowledge Backup” point of view:

“If one of your employee’s leaves, what happens to your project?”

But pairing reduces the cost of mistakes constantly.

What Gary was seeing was the countless times Jason or I would say “Let’s do ...” only to have the other one say, “No, your forgetting about...” or “No, there's a better way...”. Each of those times would have resulted in a much more costly mistake that was headed off at the pass.

Of course, another value of the pairing overlap comes from just looking at the mistakes. 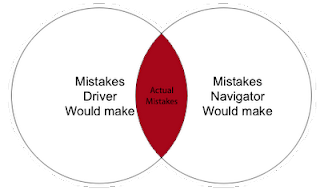 For Example: We were doing some cleanup just the other day. Finding dead code and deleting it. Removed about 10,000 lines of useless clutter from the project, which is good. However, I probably had 5-6 times where I went to delete something that was NOT clutter, and Jason stopped me. Likewise Jason had 4-5 times where he went to delete the wrong thing and I stopped him. Together, we didn’t push any of those mistakes back to the main branch when we checked in. This is like a raided disk drive. You don’t double, you square. If I’m right 95% of the time, and Jason is right 95% of the time. Then individually we are wrong 5% of the time. But paired, we are only wrong 0.25% of the Time (5% of 5%)

In today’s world of Ctrl+Z it is sometimes easy to forget that an undo even qualifies as a mistake, the cost is so low. Agile methods endeavor to make all mistakes that cheap.
Posted by Llewellyn Falco at 7:13 AM 1 comment:

Illusions of Grandeur and Agreement

I just finished watching Adam Savage presenting at maker faire.  It’s a pretty great talk. Kinda.
Here’s what I’m taking away:
“Set deadlines for personal projects”
But about 22 minutes in I become pretty dissatisfied, and I want to talk about why:
I am agreeing with Adam about everything.
Everything? Yep, It ALL makes sense. I know it ALL already... Now do I believe that if I was to sit down and actually do something with Adam that everything would be great? No disagreement? Nothing to learn?
Of course not. That’s a stupid idea. There would be tons to learn probably in the first 22 minutes. So why am I “sitting down with him now” and not disagreeing? I think my girlfriend, Lynn Langit  who happens to be a Microsoft Evanglist, said it best today:
“Evangelist seek to make everyone in the room feel smart,
Trainers try to make everyone in the room be smarter”
This illusion of agreement is starting to bug me more and more. I don’t want to spend and hour feeling smart. I want to be smarter, but I think I’m a bit odd in this. Odd not just in the desire to learn, but in my reaction when I am, or am not, learning.
There is an interesting video from Veritasium about this.
http://www.veritasium.com/2011/03/khan-academy-and-effectiveness-of.html
Learning involves some disagreement. So next time you are watching someone talk, ask yourself “Am I agreeing with everything?”  If you are there is probably a miscommunication going on.
I am constantly reminded of the training scene from ‘The Matrix’:
Morpheus: How did I beat you?
Neo: (breathing hard) You... you're too fast.
Morpheus: Do you believe that my being stronger or faster has anything to do with my muscles in this place?
Neo: (Shakes Head No)
Morpheus: Do you think that's air you're breathing now?
Neo: (Stops breathing hard)
Posted by Llewellyn Falco at 11:54 AM 1 comment: